DNA studies map human migration
The pattern of genetic mutations offers evidence that an ancient band of explorers left what is now Ethiopia and went on to colonize most of the world.

Scrutinizing the DNA of 938 people from 51 distinct populations around the world, geneticists have created a detailed map of how humans spread from their home base in sub-Saharan Africa to populate the farthest reaches of the globe over the last 100,000 years.

The pattern of genetic mutations, to be published today in the journal Science, offers striking evidence that an ancient band of explorers left what is now Ethiopia and -- along with their descendants -- went on to colonize North Africa, the Middle East, Europe, southern and central Asia, Australia and its surrounding islands, the Americas and East Asia.

A second analysis based on some of the same DNA samples corroborated the results. Those findings, published Thursday in the journal Nature, demonstrated that the greater the geographic distance between a population and its African ancestors, the more changes had accumulated in its genes. The story of human migration revealed by DNA "complements what's known through history, linguistics or anthropology," said Jun Li, a University of Michigan human geneticist and lead author of the Science study.

Both research groups relied on DNA from blood samples collected by anthropologists around the world as part of the Human Genome Diversity Project, a controversial effort from the mid-1990s to gather genetic specimens from thousands of populations, including many indigenous tribes. Previous studies have relied on data from the International HapMap Consortium, which cataloged DNA from 269 people of Nigerian, Japanese, Chinese and European descent. "Instead of saying a particular person's genome is from Africa, this kind of data allows us to say which part of Africa they were from," said Andrew Singleton, chief of the molecular genetics section at the National Institute on Aging in Bethesda, Md., and senior author of the Nature report.

In both studies, the researchers analyzed more than half a million single-letter changes among the approximately 3 billion As, Cs, Ts and Gs that make up the human genome. Those changes -- called single nucleotide polymorphisms, or SNPs -- begin as random mutations and accumulate over time as they are passed from one generation to the next. Each time a small group left its home territory to found a new population, the migration ultimately led to a unique pattern of SNPs. Comparing those patterns, the researchers were able to show that humans spread around the globe through a series of migrations that originated from a location near Addis Ababa, Ethiopia.

With the expanded DNA data set, Li and his colleagues were able to make finer distinctions among groups that were previously treated as homogeneous. In Europe, for example, the researchers were able to distinguish between Orcadians from present-day Scotland, the French, Tuscans and northern Italians from what is now Bergamo, Italy. In the Far East, population geneticists had previously surmised that northern and southern Han Chinese were distinct populations and that the Japanese islands were populated by northern Han. "Now we have direct evidence that that's true," Li said. Singleton's group also studied collections of SNPs called haplotypes that tend to be inherited en masse, as well as DNA segments known as copy number variants that appear with different frequencies in different individuals.

By creating a catalog of normal genetic variability among different groups of people, the studies will help medical researchers pinpoint the role of genes in specific diseases, said Singleton, whose lab is part of the National Institutes of Health. A third study, also published in Nature, compared SNPs in 20 European Americans to those in 15 African Americans and found that, on average, a higher proportion of the European American SNPs were likely to be harmful. Overall, the African American genomes had more SNPs, reflecting the fact that they are descended from an older population, said senior author Carlos Bustamante, an assistant professor of biological statistics and computational biology at Cornell University.

By using a computer algorithm, researchers determined that 12% of the SNPs unique to African Americans were "probably damaging," compared with 16% of the SNPs found only in the European Americans. He and his colleagues surmised that the discrepancy could be traced to the relatively small and homogenous group that first inhabited Europe. Any harmful mutations they brought with them would have spread more quickly through the isolated group. Such effects have been observed in European subgroups, such as Ashkenazi Jews and Icelanders, Bustamante said. The results suggest that larger populations could be vulnerable to "founder effects" as well, he said. The studies were funded by the NIH, the National Science Foundation and private foundations.

karen.kaplan@latimes.com
Posted by LISA at 8:18 AM 6 comments: 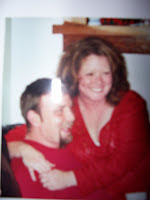 Three years ago today I married the most wonderful man.He is the kindest,most caring man I have ever met.
Our first date was a blind date,set up by my sister who worked with Shawn.I really didn't want to go out with him because he was quite a bit younger than me.I gave in,just to shut my sister up. He came to my town, we met at the mall.(Thank God he wasn't the guy with the butt crack goin' on!!) I thought,cute(young)nice,(young)polite,(young).We ate dinner,had good conversation,saw a movie, then I said "thank you, bye!!" It was still light out when we went our separate ways.
I was surprised that he ever called back asking for another date!It just grew from there!!I love him!!
Posted by LISA at 7:09 AM 14 comments: 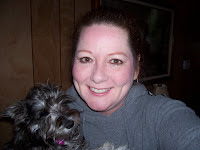 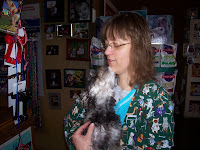 This morning i took my daughter's puppy,Macee to get spayed.
I kept putting it off because i don't want to be mean...
As you can tell in the pics,Macee doesn't know what she's in for! She even kisses the woman working at the vet clinic.
Posted by LISA at 12:10 PM 7 comments:

TO ALL OF MY BLOGGY FRIENDS:
HAPPY VALENTINE'S DAY!!!
Posted by LISA at 9:46 AM 5 comments:

It was a great day for a road trip! We drove to Kansas City with it being sunny, and fifty some degrees. It was sooo relaxing.
We met my daughter at the mall. Shopped a little, got Panera Bread bagels(yummy!) to take home, shopped a little more, then said bye to my daughter.

We then went to The Cheesecake Factory, to meet our new friends, John and Amanda.(thanks for joining us!)
They are adopting from Ethiopia, with CHI also. It's great to be making new friends along our journey. I guess we should have taken the camera, to show off the cheesecake!!! Yummy!

There are alot of parents coming and going to Ethiopia this week! I'm so happy for everyone bringing home their little ones!!! Congrats!!
Posted by LISA at 8:33 PM 11 comments: